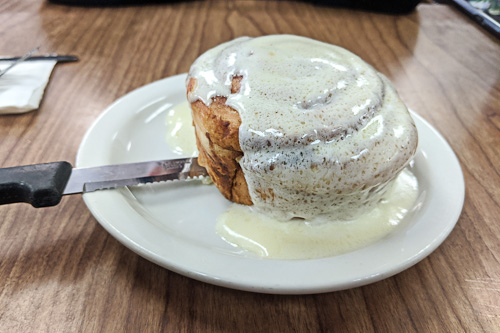 Decent, but not spectacular.

Great cinnamon rolls are about balance: the bread, the cinnamon swirls, and the icing must be in tune with one another. They need to build to a collective goal like a fine orchestra rather than fight and bicker like so many schoolchildren.

The cinnamon roll from Bagels and Brew in Lake Forest, CA makes a respectable effort in the art, but it falls short overall. 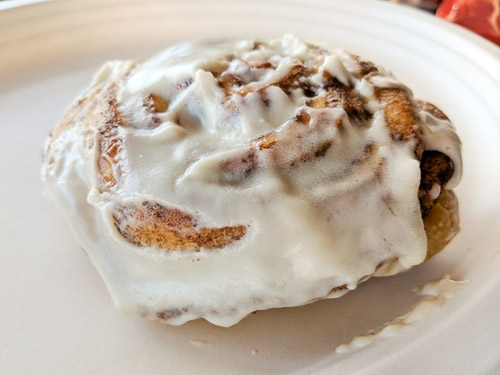 Cinnamon roll from Bagels and Brew in Lake Forest, CA

I don’t want to give the impression that this roll was bad, because it wasn’t. It was fine. The icing didn’t have any weird aftertastes, the bread was neither over- nor under-done, and the cinnamon swirls were present.

While it wasn’t bad, neither was it amazing. Some of the roll layers had folded over on themselves, leading to a structure more akin to a cinnamon pull-apart than a roll. The bread itself was slightly on the dry side, though the roll was had in the late morning and thus was probably slightly past its prime. The cinnamon swirls could have been more assertive, as they were dominated by the rest of the treat, most notably the flavor of the frosting.

Overall, a good attempt that could be improved by turning more attention to balance. 8/10

Decent overall, but could use a little work in the frosting department.

In the summer, the lodge is full of hikers and motorcyclists. In the winter, skiers and snowmobilers roam the halls. At all times of the year, there are cinnamon rolls.

Cinnamon roll from the Cascade Lodge Restaurant in Lutsen, MN

I was in the area for a wedding, and when I stopped for breakfast at the Cascade Lodge Restaurant, I noticed that cinnamon rolls were on the menu. Naturally, I indulged.

The flavor of the roll itself was nicely balanced, but the icing-style frosting was rather mundane. Since the roll bread was wide, flat, and slightly flaky, the choice of icing rather than buttercream made sense. Still, the icing was more monotone than I would have liked. Yes, I know that icing is primarily sugar, but that doesn’t mean it can’t have some zing to it. The good news is that there weren’t off flavors in the icing, so it was a lot better than, say, the terrible icing that is in Pillsbury tube “cinnamon rolls”.

The bread was slightly on the tough side, but I’m not going to ding the roll for that, as I actually got the pastry to go and ate it later in the day. (The omelet I had for breakfast there was filling enough to make me rethink my plan to have the roll as desert.)

It was a decent cinnamon roll, just not spectacular. 7/10