I have discovered that the cinnamon rolls vary from Whole Foods to Whole Foods.  I suppose that isn’t surprising, given that they bake them on site, but still, it was a matter of changing an assumption.   The one today comes from a Whole Foods in Denver; compare it to the Whole Foods roll I reviewed from Minnesota and you’ll see quite a bit of difference. 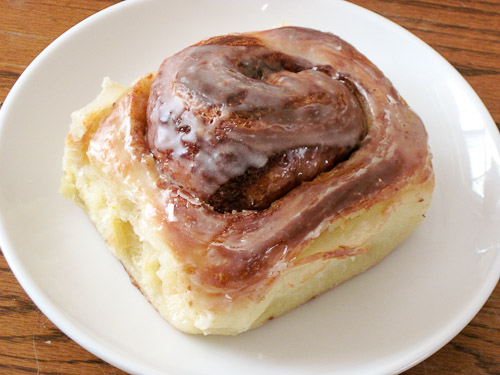 Cinnamon bun from Whole Foods in Denver on Hampden Avenue

This is a very large bun.  The bread is sweet with a nice texture: soft with a relatively open crumb.  Similar to the innards of a properly baked yeast-leavened doughnut.  I would have preferred cream cheese frosting, but the icing that is pleasant is well-executed and does not overwhelm the rest of the roll.