While walking back to my car after a fun morning of skiing at Keystone, I decided I needed a coffee. Starbucks was an option, but across the way was something different: Inxpot Coffeehouse. Turns out they sell more than just coffee: they sell cinnamon rolls.

I had to indulge. 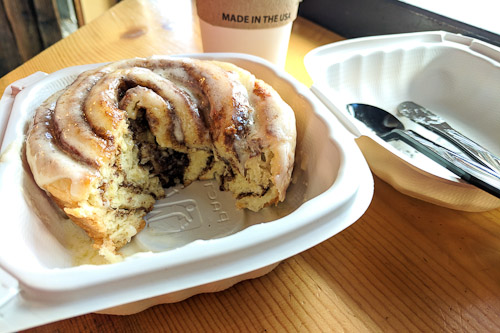 Cinnamon roll at inxpot coffeehouse in Keystone, CO, minus a few bites, and after being warmed up enough to melt the frosting

Did I want the roll warmed, the barista inquired? Of course I did! Pretty much every cinnamon roll is better when enjoyed significantly above room temperature. I’m not sure what this one would have tasted like when cold, but when warm it was really good.

The bread was fully baked (as opposed to overly doughy or underdone), with a tight crumb and a delightful level of moisture. When pulled, it stretched a bit before eventually giving way. In the mouth, it melted.

The inter-swirl cinnamon layers were nicely balanced between sugar and cinnamon, and the texture was smooth, not grainy.

The frosting had a cream cheese base. There was a nice buttery accent and perhaps a hint of vanilla without overpowering the other ingredients. No weird off-tastes or aftertastes were present. I’m not sure about the frosting’s texture, since it was all melted by the time it got to me, but it looked nice in the display case.

So what was holding this roll back? Not much. It was tasty, and I’ll probably get another one someday. However — and I realize this is going to sound ridiculous — I felt like the roll was lacking the verve of the very best rolls. Maybe it was the relative indifference of the barista to my choice of the roll versus the other pastries (which also looked great). Maybe the problem was actually me: I had just been skiing, so I was hungry, and everything tastes better when you’re hungry. Not sure.

Overall, it was everything a cinnamon roll should be and would be worth trying if you’re nearby for some skiing. 9/10

The walkway between the free parking lot and the gondola