OK, but nothing incredible.

If you drive through the seemingly endless plains of eastern Wyoming on I-25, you might eventually arrive in Bill. There are only three stores in Bill: the post office, the Oak Tree Inn, and Penny’s Diner, which is attached to the Oak Tree Inn.

I was in town for the 2017 solar eclipse, and when I walked in to Penny’s Diner for breakfast, I couldn’t help but notice the stacks of plastic-wrapped cinnamon rolls prominently displayed along the counter. I sat down and asked for one. 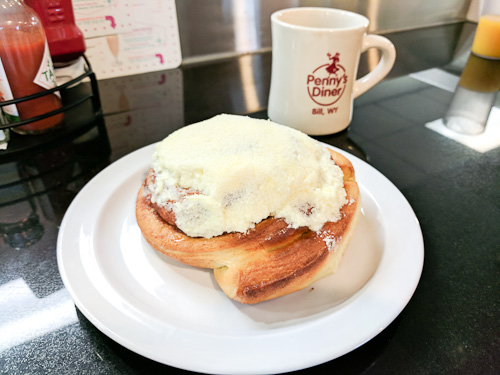 The roll was served at room temperature and looked decent even when the plastic wrap was removed. I didn’t ask if they were baked in-store or off-site, but based on the packaging and the remoteness of the area, I suspect this one was baked on-site within the previous day or two.

The slightly tough bread had a decent taste. The inter-swirl cinnamon layer could have been a bit more assertive but was serviceable. Unfortunately, the cream cheese frosting really let down the rest of the roll. The mouthfeel was extremely grainy, and there was a strange vaguely minty aftertaste.

I think a trip through the microwave for 15 seconds would have improved everything substantially: the bread would have been softened up, and the frosting would have become smoother.

Overall, an acceptable effort that was held back by its frosting. 7/10