I really wanted to like the Baker’s Wife cinnamon roll.  I’d heard good things about the bakery in general, and they have a wonderful painted statue of a cow near the store’s door.  The store had a lot of character, and I mean that in a good way.

At first, the cinnamon roll looked promising.  It was served with care in a boat-type paper tray, and it was of the soft-sided variety (where a bunch of rolls are packed in a pan to bake, rather than baked individually), which I generally prefer. 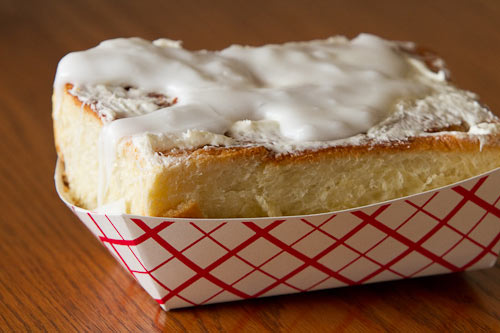 Unfortunately, the taste did not live up to the expectations.  It wasn’t bad, it just wasn’t particularly good.

The frosting might have been the biggest let-down.  Cinnamon rolls are supposed to have cream cheese frosting (says me), but the Baker’s Wife roll had frosting that tasted like marshmallows.  If the deviation had worked, everything would have been fine, but sadly that was not the case.

All that being said, the cookies at the Bakers Wife looked delicious, and there was a steady stream of customers, so I will be making a return journey.  Just not for cinnamon rolls.