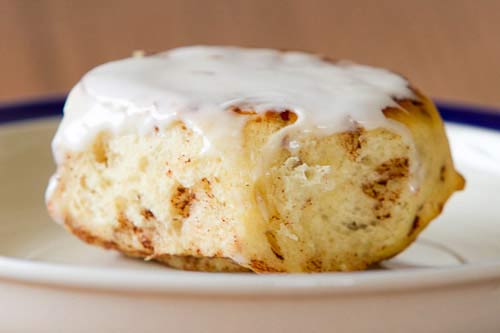 Pillsbury cinnamon roll. How do they make the icing so white?!

Let’s start with the size.  These things — I hesitate to call them “rolls” — are about 30% the mass of yesterday’s Byerly’s rolls.  Three or four bites, and they’re gone.  Let me put it a different way: these rolls are so small that they have roughly the same mass as a slice of sandwich bread.

And are those tasty bites?  Heck no!

The texture is unappealingly homogeneous.  I’m not sure what sort of trickery Pillsbury employed to make these things rise while they’re baking, but the chemistry seems to have contributed to them coming out as one big lump instead of a multi-layered delight.  You know how much fun it is to unroll each layer of a cinnamon roll and enjoy its segmented goodness?  Can’t do that with these. 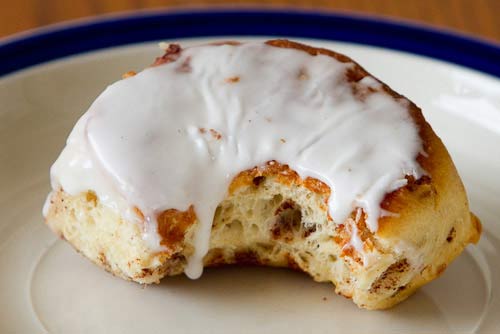 A Pillsbury roll with a bite. Note the lack of layers/spirals

Things really go downhill once you get a tiny piece in your mouth.  The taste is like… something… hmmm… a chemical factory?  It’s bad.

You might think you’ll be saved if you stop after that first bite, but how wrong you’ll be: that fake-as-a-politician taste will linger longer than your unemployed college buddy surfing your couch.

Fortunately, I had a roommate to pawn these off on, thus saving my palate from chemical doom.  (Thanks for taking one for the team, Rob!)

Where to get them:

Don’t.  Ok, you really want some?  Why?  And are you seriously asking me where to buy refrigerated ready-to-bake cinnamon rolls in a tube?  Sheesh.

This entry was posted in Home baked rolls. Bookmark the permalink.