An extremely good cinnamon roll.  Currently a tie with Isles Bun for the title of “best cinnamon roll in Minneapolis” 10/10

Kowalski’s Market is a small chain of high-end supermarkets in the Twin Cities area.  They are known for a variety of things, one of which is their bakery.  When I learned that their bakers turned out cinnamon rolls, well, I turned up my nose and said, “No way am I going to try another chain cinnamon roll.”

Just kidding.  I got in my car and sped there as fast as I could.

True to the rumors, a big tray of man-sized cinnamon rolls was on display in the bakery department.  I scoffed at the neighboring caramel rolls, plucked one of the cinnamon rolls from its resting place, and made my way to the cashier. 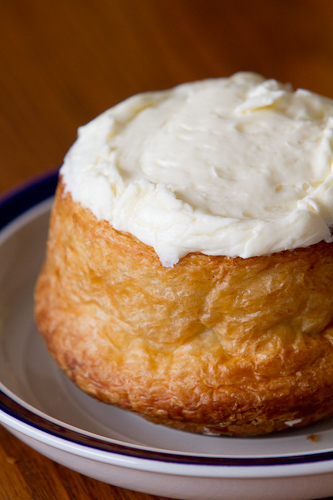 Once home, I dug in.  It. Was. Fantastic.  Imagine a flaky croissant with arms, cinnamon separating each swirl, and thick cream cheese frosting on top.  Tender with just the right amount of chewiness.  Enough cinnamon flavor to make a statement, but not so much as to be overpowering.  And that frosting, oh my.

I’ve been a bit concerned lately about day-to-day consistency in the cinnamon rolls from certain stores, so about a week after that first cinnamon zen experience, I went to a different Kowalski’s at a different time of day and tried the cinnamon roll again.  Once again, it was amazing.

If you like a light, flaky cinnamon roll, then Kowalski’s is your best best in the Minneapolis area.  If you prefer a heavy, doughy cinnamon roll (not a bad thing, mind you), then Isles Bun is still the winner.  Co-champions.  Appropriate for the Twin Cities, don’t you think?