OK, but nothing incredible.

If you drive through the seemingly endless plains of eastern Wyoming on I-25, you might eventually arrive in Bill. There are only three stores in Bill: the post office, the Oak Tree Inn, and Penny’s Diner, which is attached to the Oak Tree Inn.

I was in town for the 2017 solar eclipse, and when I walked in to Penny’s Diner for breakfast, I couldn’t help but notice the stacks of plastic-wrapped cinnamon rolls prominently displayed along the counter. I sat down and asked for one.

The roll was served at room temperature and looked decent even when the plastic wrap was removed. I didn’t ask if they were baked in-store or off-site, but based on the packaging and the remoteness of the area, I suspect this one was baked on-site within the previous day or two.

The slightly tough bread had a decent taste. The inter-swirl cinnamon layer could have been a bit more assertive but was serviceable. Unfortunately, the cream cheese frosting really let down the rest of the roll. The mouthfeel was extremely grainy, and there was a strange vaguely minty aftertaste.

I think a trip through the microwave for 15 seconds would have improved everything substantially: the bread would have been softened up, and the frosting would have become smoother.

Overall, an acceptable effort that was held back by its frosting. 7/10

Wow, this is the one.

I’ve eaten a lot of cinnamon rolls from a lot of bakeries, and most are simply average. Not this one. This one is different. This one is something special.

The cinnamon roll from Detour Bakery brings together excellence in bread, inter-swirl filling, and frosting. 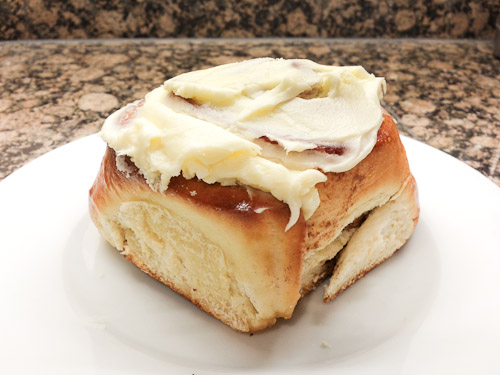 The frosted cinnamon roll from Detour Bakery in Denver, Colorado.

The bread was perfectly done throughout. There were no under-baked spots, the crust was golden and tender, and the flavor and texture were like a nice white dinner roll. It was moist and yeasty (a good thing!) while still being fluffy.

The inter-swirl filling is where a lot of rolls fall off the rails, but not this one. The cinnamon and sweetness were well-balanced, and the filling was neither too dry nor overly moist. so the cinnamon stuck to the bread without turning the bread gooey.

Up on top was a dollop of frosting. Nice texture, no strange after-tastes, and complementary to the flavor of the bread and cinnamon. On the spectrum of frosting flavors, I thought it fell more towards buttercream than cream-cheese.

This might be my new favorite. At the very least, it’s much more accessible than my previous favorite up on the Alaska Highway in British Columbia. It’s worth a detour.

Nestled at the foot of Mt. Evans, location of the highest paved road in North America, there is a a log-construction building surrounded by natural beauty. Pine trees in the adjacent wilderness make the air sweet, and the 10,600 ft elevation and nearby lake ensure that the breeze stays cool  even in the brilliant sun. The Echo Lake Lodge acts as meeting point, gift shop, and restaurant for cyclists and drivers heading up Mt. Evans or exploring the woods. And they sell cinnamon rolls. 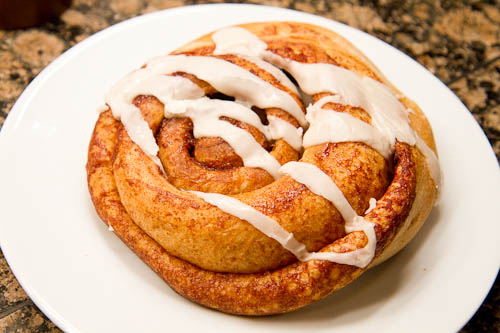 My roll came out of the oven only two hours before I sampled it. The flavor of the roll was well-balanced. Not too sweet, not too cinnamon-y. The bread had hints of milk and yeast, also quite pleasant. The icing tasted quite natural and neutral with perhaps a hint of buttercream and vanilla; I’d be shocked if it was anything except homemade.

Unfortunately, the roll was somewhat under-baked. Where it was properly done, it was excellent, but there were many spots in the interior that were only raw, chewy dough.

The underbaked spots took away from the roll so much that I have to rate it 6/10. If the roll had been fully baked, it would have easily been a 9/10.